Written by jsolloway on January 29, 2016. Posted in Blog, Promotions.

Don’t miss out on these cleaning offers for February… 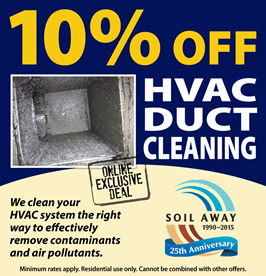 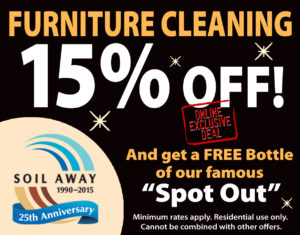 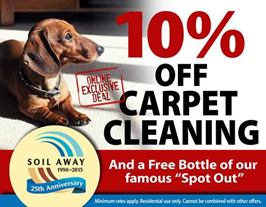 Written by chrischambers on January 25, 2016. Posted in Tips and Advice, Water Damage.

With the cold weather upon us, many New Hampshire residents will face the problem of water damage stemming from colder temperatures and other problems including power outages. This is a serious concern for owners of vacated properties. This could mean a seasonal home, a family on extended vacation or a house for sale. Our water damage repair experts at Soil Away have compiled the following blog to give you some tips for preventing water damage in vacated properties. The goal is to keep your home in shape throughout the winter months.

Written by jsolloway on January 18, 2016. Posted in Blog, Tips and Advice, Water Damage.

New Hampshire (NH) winters can be harsh. We witnessed this first hand in 2015 where record cold and snowfall pummeled the majority of the state. You know it was a tough winter when “ice dams” and “frozen pipes” become a mainstream topic of discussion around the office water cooler. Nevertheless, we hearty New Hampshire folk persevere despite the winter circumstances. With that said, we also think it wise to be a little more prepared for what may lay ahead. This article will help New Hampshire residents navigate winter water damage woes that accompany our winter storms and frigid temperatures.

Emergency water damage mitigation situations require immediate attention. Knowing who to call for flood cleanup services is not always easy. You are under stress and acting with a sense of urgency. Hiring a company that is technically proficient and has your best interests in mind is paramount. One Goffstown, New Hampshire family just went through this experience when their hot-water tank blew in their finished basement. They were traveling for a long weekend and discovered the water damage upon their return. Fortunately they got a referral for one of NH’s premier flood cleanup firms: Soil-Away.

How to Deal With an Oil Furnace Puff Back

Written by jsolloway on January 7, 2016. Posted in Blog, Tips and Advice.

Much of the New Hampshire population heats their property with oil. During the cold winter months, heating systems run overtime. This is when homes and businesses are susceptible to oil furnace puff backs. This occurrence contaminates a property with oily soot and smoke. There is a lot that goes into the disaster recovery process. This article helps educate readers on how to deal with an oil furnace puff back in New Hampshire (NH).

The 20+ full time employees at Soil-Away recently honored company founder and president, Jack Solloway, at the year-end meeting in December. Senior technician, David Buck, presented Jack with a gift from the entire staff in recognition for 25 years in the cleaning and restoration industry. The customized gift was a desk-clock with a plaque that reads, “25 Years of Leadership – Jack Solloway.”

Happy New Year! Thank you for all your support in 2015. It was a great year and we look forward to keeping the positive momentum going.

With that said, we thought it would be fun to share with you some meaningful quotes and thoughts. Our team is not perfect, but we are always working to improve. We found a lot of wisdom in the text below and are looking to apply it to our everyday lives.

It is our hope that these thoughts inspire you in the new year as well! Print the list. Put it on your desk or refrigerator. Review it often.

It is not a frequent occurrence in New Hampshire, but on occasion a squatter situation can lead to fire damage cleaning needs. This happened at an Exeter property that was foreclosed and vacant. Squatters, who unlawfully occupy an abandoned building, had moved into a once prestigious home. The property was empty for over a year after the owners were foreclosed on. The squatters broke in at some point during its vacancy. Their daily habits, which included illegal drug usage, caused a small fire in the living room. The fire caused smoke damage throughout the property. The damages were discovered by the bank when they inspected the property months later. Soil-Away was called to the Exeter house to perform the fire damage cleaning services.