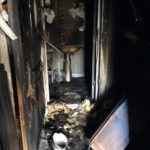 Has a fire or flood damaged your property? Do you have a mold infestation or biohazard emergency? Call the emergency disaster cleanup experts at Soil-Away – 603-641-6555. Soil-Away has been serving the greater Hudson, NH area since 1990 and is family owned and operated. Here is a quick story of how we recently helped a Hudson homeowner recover from fire damage.

One evening a Hudson resident fell asleep on her living room couch to the sound of her favorite television show. She forgot that she left her cigarette burning in the ashtray nearby which was slowly igniting a paper cup on the end table. She didn’t smell the initial flames so she lay there fast asleep until the sound of her dog barking suddenly jeered her awake.

In a panic, she grabbed her dog and ran outside to safety. Her neighbors crowded around her for support and help. Once she regained her composure, she called for emergency assistance and fire fighters came immediately to put out the flames. The following day she was left with a house in shambles and had no idea who to call for help to take care of an emergency disaster cleanup. One of her neighbors insisted that she call Soil Away’s fire and smoke damage restoration team for help and so she pulled out her phone and called the 24/7 service to get the recovery process started. The professional team explained that their certified crew are experts in handling emergency disaster cleanup situations and that she had nothing to worry about.

What to expect during an emergency disaster cleanup

The team arrived in their special PPE suites and began removing all non-salvageable material from the home. Luckily, the Hudson woman kept all important documents in fire and waterproof boxes but there were personal items that needed to be restored to pre-existing conditions. The team collected all salvageable soft contents such as clothing, stuffed animals, and shoes and sent them to the Esporta washing station based at Soil-Away’s headquarters in Hooksett, NH. There, the items were separated by category and washed and deodorized to remove smoke odor. After a thorough cleaning, the items were sent to the drying room where air movers, and dehumidifiers gently dried the materials before being packaged and sent back to the homeowner.

On the scene, the crew worked to remove all heavily damaged drywall and insulation from the home and treated the framing to help eliminate smoke odor. The fire also left the home with structural damage so additional remodeling was needed to bring the house up to code and regulations. Once the team finished restoring both the inside and outside structure of the home, the house was ready for repainting and remodeling. Within no time, the home was back to its original beauty and the homeowner was thrilled to know that she could safely move back in. The insurance company paid to replace all damaged material that couldn’t be restored such as her favorite couch, television, rugs and precious jewelry. This made a potentially tragic situation a little easier to overcome.

If you find yourself in the midst of an emergency disaster cleanup, don’t worry. The team of experts at Soil-Away are here to handle the situation. Major life setbacks are tough enough to navigate, call the professionals to deal with restoring your property from fire, flood, mold or biohazard damage while you focus on the rest. For 24-hour emergency assistance, call 603-641-6555.