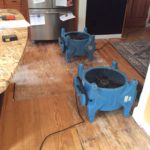 Being winter in New England, temperatures get bitter.  Pipes, especially those in basements and attics, are susceptible to freezing in lower temperatures.  After a frozen pipe burst, a nursing home in Concord, NH, seeks water damage restoration when they are left with a flooded basement and no running water for their daily needs and emergency medical care services.

Having taken care of the residents, several of the employees had not noticed the pipe burst until they tried turning the faucet themselves and realized that there was no flow of water.  Upon checking the basement, the employees were devastated to find the basement flooded and a rush of water expelling from the pipes.  Frantically, the employees at the nursing home were able to shut off the main water valve in the nursing home to stop the flow of water.  This, however, was at the expense of leaving the basement flooded with water.

Now that the flow of water had stopped, the flood was the least of the employee’s worries.  The flood was something that could be repaired, and while several objects were ruined in the wet basement, they were replaceable.  The biggest concern for the employees was the heath and safety of the residents at the nursing home.  Without a proper flow of water, the residents were unable to do many of their daily activities.  The owners of the nursing home knew they had to act quickly.  They sought immediate water damage restoration in order to bring back a state of mind to the residents in their complex.

The owners of the nursing home called Soil-Away Cleaning and Restoration Services for immediate around-the-clock water damage restoration services. Being a commercial-ERP client of Soil-Away, the nursing home got priority response and already knew how to respond in a situation such as this. Soil-Away is a family owned and operated cleaning and restoration service local to New Hampshire.  They have been in the restoration business since 1990 and are respected among many surrounding businesses.  By calling (603) 641-6555, Soil-Away will respond to your needs, whether it be a pipe bursting, soot cleaning, water damage, or fire damage.

Upon talking to the owners of the nursing home, Soil-Away sent out their IICRC-certified employees to the nursing home, who came with both the advanced equipment and knowledge to not only clean up the flooded basement and restore a proper water flow to the pipes, but also to salvage many of the items that had become damaged and wet from the immediate flood.

How to Prevent Frozen Pipes from Bursting

On top of the repairs, the Soil-Away technicians aired out the basement so that it was free of water and mold development.  They informed the employees of the nursing home about strategies to prevent future pipe bursts, which included the following:

Low temperatures can cause frozen pipes to burst, no matter the situation.  However, these are some techniques that can warm up the water flow to limit any frozen pipe bursts.  The technicians from Soil-Away were professional and informative because they not only cleaned up the water damage, they restored the nursing home back to its pre-water damage state, they brought security to the residents, and they informed the employees of the nursing home with strategies to limit future pipe bursts in cold New England temperatures.  Call Soil-Away Cleaning and Restoration Services today if your home or business is in need of water damage restoration.