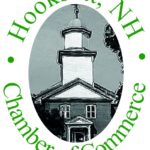 Soil-Away is combining efforts with Cocci Computer to co-host the Hooksett Chamber’s monthly after-hours networking event. The date is Wednesday, October 8th and starts at 5:30pm. The event will be at the Cocci Computer headquarters located at 1558 Hooksett Road in Hooksett. Attendees included local business representatives from Hooksett and surrounding towns such as Manchester, Concord, Bedford, Goffstown, Allenstown, Pembroke, and Auburn. This networking opportunity is open to chamber members, guests, and future-members.

Soil-Away recently performed a large water damage cleanup project with Habitat for Humanity- Nashua, NH Chapter. Habitat for Humanity is a nonprofit which, “works in partnership with local people and businesses to assist people in need by building and renovating houses.  We help create simple, decent houses to foster communities in which people can live and grow.”

The organization is currently working on a Nashua home which was donated to them. Prior to renovations, the property sustained serious water damage from a broken pipe. They called upon Soil-Away to help. 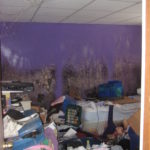 The Bedford house sat vacant for over four months. It was a foreclosure. The former owners skipped town. The bank was now getting around to inspecting it. Amongst other things wrong, the basement needed extensive mold removal services. It was a finished space that was used as a play area for the kids. Now it was contaminated with dangerous mold. Ceilings, walls, and floors of this once prestigious Bedford home were covered in mold. The bank wanted to sell the property, but needed mold removal services first. 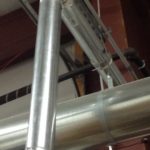 Last month we featured tips 1-5 on how to avoid fire damage and increase safety in your home. The United States has approximately 400,000 house fires every year (NFPA). We see many in Nashua, Salem, and Laconia every year. We do not want you to be a part of that stat. Please read our final five tips on fire damage prevention and safety. If you missed last month’s article click here.

Written by wsigenesis on September 23, 2014. Posted in Uncategorized 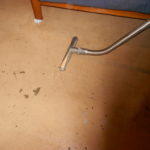 A broken pipe had leaked water into an unfinished basement. It occured for over eight hours. Panicked homeowners searched online for flooded basement cleanup companies in the Laconia, NH area. They quickly found Soil-Away Cleaning & Restoration. A call to the company and a water damage restoration crew was on its way.

Written by wsigenesis on September 15, 2014. Posted in Uncategorized

A property’s air ducts are hidden from view within the home. They are often in the corner of rooms or behind furniture. They often go unseen by the untrained eye. Because they’re hidden from sight, air ducts often go un-cleaned for several years. This can cause a range of issues to arise in the property. It can even reduce the safety of the home environment. Fortunately, many homeowners across Nashua, Manchester and Concord are able to gain fast access to professional air duct cleaning services. Here, we’ll look at two important benefits of working with an air duct cleaning specialist. 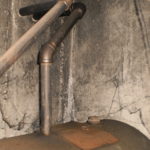 The Concord, NH temperatures were slowly dropping. The summer to fall transition was occurring. Nights were frequently in the 40 to 50 degree range. For many Concord homes this prompted their oil furnace heating systems to kick on. As usual, many residents try to stretch out another year without preventative maintenance to their furnace. The threat of oil furnace puff back damage drastically increases. A puff back occurs when the oil furnace malfunctions. The system will spew a fine oily, soot residue into the house. Furnace puff back damage can be extensive. 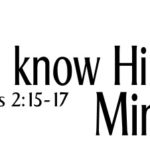 Soil-Away recently sponsored a charity golf tournament to benefit Do You Know Him? Ministries. This growing outreach organization serves under-resourced members of the downtown Manchester community. They provide numerous services to the community such as, but not limited to the following: breakfast ministry, prison ministry, street ministry, and marriage ministry. 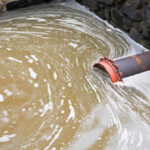 How can beautiful trees outside a home cause the need for an emergency sewer backup cleanup? Old underground sewer pipes, especially in cities such as Manchester, NH, are susceptible to root infiltration. The combination of aging plumbing and growing roots can cause a blockage. When the outflow of sewage is impeded a backup occurs. If sewage is flowing back into the house it is an emergency. Immediate action must be taken to fix the blockage. Sewer backup cleanup is needed as well.