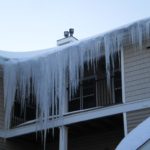 The snow on the roofs always seemed to be accumulating. This was largely due to a record breaking winter. Countless snow storms were taking their toll on Concord, New Hampshire (NH) properties. Trees were collapsing, pipes were freezing, and ice dams were everywhere. A local senior living facility was feeling the effects. They had been battling ice dams for over a month now. Many of their resident homes on campus were inflicted with water damage from ice dams. The facilities staff was working side-by-side with Soil-Away to mitigate damage.

Soil-Away Cleaning and Restoration Services was not new to dealing with water damage from ice dams. The company has seen nearly twenty-five winters in the Concord area. As a professional water damage restoration firm, they worked non-stop with the local senior living facility to mitigate the issues. Soil-Away coordinated multiple teams to deal with the ice dams. They worked in three crews: prevention, inspection, and mitigation.

Water damage from ice dams can be prevented. It is more difficult to stop once they start. Nevertheless, preventative measure still should be taken to minimize water damage. The facilities staff knew this. Unfortunately they were too small of a crew to keep up. Once they fell behind the ice dams started occurring. Soil-Away was brought in to synchronize a larger campaign to remove snow from the roofs. Ice dams were broken up. In some cases they were safely chopped up. In other cases, crews melted channels in the ice dams to let the snowmelt run off the roof. These measures drastically slowed down the water damage from ice dams.

Continuous interior property inspections were performed by Soil-Away. Water damage from ice dams is usually obvious to detect. Nevertheless, thorough property inspections by a certified water damage specialist are always encouraged. Once water infiltrates a structure through the roof it can travel in unexpected ways. Soil-Away inspected the Concord structures with moisture meters and infrared cameras. This way no moisture intrusion would be missed. If water damage from ice dams is missed it could result in microbial grown on the interior of a property. This is not acceptable at a senior living facility.

The final piece of Soil-Away’s service during the ice dam process was water damage mitigation. When water damage from ice dams was found in a building it was immediately addressed. Often times this involved removal of wet insulation and sheetrock. In some more severe cases, entire walls of sheetrock and insulation needed to be removed. The remaining structure was then cleaned and dried. Soil-Away’s commercial air movers and dehumidifiers could be found all over the Concord campus. The water damage mitigation process has to be sharply coordinated with the senior living facility’s facility staff. Rebuild and repair efforts needed to immediately follow the drying process. They needed to get residents back in their properties immediately.

After nearly a month of battling water damage from ice dams the emergency cases subsided. In the end, Soil-Away identified seventeen building that were affected by ice dams. They successfully performed the water damage mitigation in each case. Soil-Away’s preventative efforts saved an estimated twenty-three other buildings from suffering water damage from ice dams. It was a long winter from the Concord, NH senior living facility. Fortunately they partnered with Soil-Away to address all their issues related to ice dams.