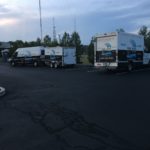 Why is Smoke Damage Cleanup so Important?

While fires are destructive and destroy buildings, the smoke and other remains that come from a fire are just as bad or even worse, which is why a smoke damage cleanup is essential after a fire.  The fine particles from smoke can penetrate one’s lungs and cause a variety of problems such as:

Once smoke or soot is noticed from a fire, one should seek a smoke damage cleanup company as soon as possible.  Smoke damage is worse when there is continued exposure, so getting rid of smoke or soot quickly will eliminate many of the effects.

The best way to avoid a smoke damage cleanup is to avoid fire and smoke altogether.  Oftentimes, a fire happens by accident and one must respond quickly to stop it and limit its effects.  However, many fires happen because of people.  As many as 90 percent of wildland fires in the United States are caused by humans, usually because they leave fires unattended, negligently discard cigarettes, or intentionally create fires to harm others.

The campsite in Old Orchard Beach, ME caught fire because residents left the fire unattended for a period of time.  Had they been more alert, the fire would not have caused damage and there wouldn’t be a need for a smoke damage cleanup.  The best way to prevent a fire is to be alert, be careful, and use common sense.

Listed are some ways you can prepare your home or business for a fire:

By following proper prevention techniques, one should be able to limit the effects of a fire.  If not, once the fire is extinguished, they may need to seek out a smoke damage cleanup company.

After the fire at the campsite in Old Orchard Beach, ME, the owners of the camp decided to call Soil-Away Cleaning and Restoration Services, a local disaster restoration company that has an emergency 24-hour hotline and has been in the disaster relief business for over 25 years.  To them, it was a no-brainer to choose the local company that had a great reputation and a lot of support.

The Soil-Away technicians were all highly professional and IICRC-trained.  They made quick and safe work of the smoke damage and also provided rebuilding services to restore the campsite back to its pre-damaged state.  Additionally, they provided advice on how to further prevent fires from occurring.  The installers and staff at Soil-Away Cleaning and Restoration Services really care about your home or business and will do everything in their power to make it look and feel as good as it was before the disaster struck.  Call Soil Away today at 1-800-293-6319.