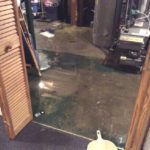 Written by jsolloway on May 2, 2016. Posted in Blog, Case Study, Water Damage

A Candia, New Hampshire (NH) family needed basement flood cleanup services immediately. They just discovered four inches of standing water in their newly renovated basement. It was after 8:00pm on a Saturday night. They had no idea who to call for emergency water damage mitigation services. They could not handle the cleanup themselves. A professional restoration company was the solution. This case study gives an overview of a recent basement flood cleanup loss in Candia, NH.

The family had just returned from a cook-out at a friend’s house. The young couple put the kids to bed and retreated to their basement. It was time to relax. As soon as they started walking down the stairs they knew something was wrong. A gushing sound of water hit their ears. With heightened anxiety, they raced to investigate. What they discovered was devastating. Wall-to-wall, the basement was flooded. Carpets and furniture were soaked. Toys were floating in several inches of accumulated water. The water damage was extensive. They ran upstairs to get their phones. It was time to start calling basement flood cleanup companies to service their Candia property.

The couple dialed a well-known disaster restoration franchise. They were only able to leave voicemails. After twenty minutes of no response, they looked for another solution. They performed an online search for “basement flood cleanup companies – Candia NH.” They found Soil-Away Cleaning & Restoration Services based in nearby Hooksett. It was late on a Saturday night. The couple did not have much hope, but they called anyway. The phone was answered after two rings. They provided their contact information and were then connected to a water damage restoration specialist at Soil-Away. Their hope was restored.

The water damage restoration expert at Soil-Away assessed the situation over the phone. He coached the couple on how to safely shut off the water supply to the house. This would stop the continuous flow of water into the basement. In addition, a basement flood cleanup crew was dispatched to their home that night. Two trucks arrived with a four person crew to start extracting water and cleaning up the flooded basement. Despite the late hours on a weekend, the restoration technicians worked efficiently. Their positive attitude and work ethic put the Candia family completely at ease.

After a couple hours of water extraction the basement was in much better shape. The technicians worked to removed damaged items such as furniture. They also setup commercial drying equipment. Fans and dehumidifiers worked to dry the structure. The carpet and pad were saved. Very little demolition was needed for the walls. The basement flood cleanup crew arrived on scene quick enough to salvage the majority of the basement and contents. The couple was amazed. Their basement was saved thanks to Soil-Away’s restoration expertise.

Soil-Away specializes in 24/7 emergency basement flood cleanup services for the Candia, NH region. The company, based in Hooksett, works throughout all of south and central New Hampshire. Soil-Away’s full service menu includes flood, fire, smoke and mold damage restoration. Soil-Away works with all insurance companies to help provide you with the best service during your water damage claim. Contact the office 24/7 to arrange for services.