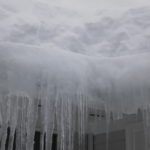 Over 60 inches of snowfall during late January and early February had the city of Manchester, New Hampshire (NH) in a bind. Snow piles rose higher and higher. Schools and business struggled to remain open. The harsh winter conditions were wreaking havoc on the entire southern NH region. Worst of all was the rampant occurrences of property damage insurance claims. The leading cause of claims was due to ice dam water damage. Hundreds of claims had been submitted by Manchester residents because of water damage from ice dams on roofs.

Ice dam water damage is a common occurrence during winters with frequent and heavy snowfall. Ice dams are a result of heat escaping from the home. The leaking heat raises the temperature in the attic space. The underside of the snow-covered roof begins to warm. As this happens, snow melts and starts to drain towards the edge of the roof. The edge of the roof is colder causing the water to refreeze. Icicles and dams begin to form. If this occurrence is left unchecked for too long the chance for ice dam water damage greatly increases. Ice eventually backs up underneath roof shingles and makes its way into the attic or wall space. The ice infiltrating the house under the shingles will start to melt causing water damage in the house.

For too many Manchester residents, icicles have rapidly been building up on the edge of their roofs. This is the first sign that a home may soon fall victim to ice dam water damage. The first step in preventing damage is to keep up with snow removal. If snow is not able to accumulate on the roof, then ice dam potential is mitigated. A tool such as a snow rake is often effective in performing this task. Safety always must be the priority when it comes to snow removal from the roof. Many contractors such as roofers, arborists and chimney companies can be hired for such services. Make sure to obtain their certificate of insurance prior to letting them perform the work.

When it comes to the interior of your home ice dam water damage can take many different forms. Most Manchester residents will start seeing water marks on the ceiling. Water also finds objects such as light fixtures to collect in. Sometimes water will begin to pool in walls. Paint will bubble or swell as water accumulates. In other cases, homeowners may notice water pooling on floors. Homeowners must exercise caution if they begin to notice these signed of ice dam water damage. Safety hazards such as slip-and-fall are a real risk. Additional hazards include ceilings or walls crumbling.

Successful cleanup and restoration following ice dam water damage depends on two things. First, the source of damage needs to be eliminated. Snow and ice dams need to be removed from the roof. The second step is to have professional water damage mitigation services performed. Soil-Away Cleaning and Restoration specializes in insurance claims related to ice dam water damage cleanup. Manchester, NH residents have trusted Soil-Away for 25 years as their first choice for property damage restoration. Call 603-641-6555 to schedule service.