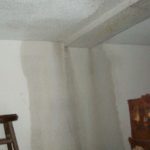 Flooded house cleanup is a major challenge for people with second homes in Meredith and the surrounding Lakes Region of New Hampshire (NH). Every spring we encounter eager vacationers fleeing up to their lake homes to prepare them for the summer months. When they enter their properties in April or May for the first time in months, they occasionally get a surprise. The surprise can take many forms but usually the common denominator is water damage. At this point Soil-Away is typically called upon for flooded house cleanup services.

During long, cold Meredith, NH winters properties can take a beating. One recent flooded house cleanup job we did was because of a frozen pipe. The pipe under the kitchen sink froze and put a hairline crack in the metal pipe. A slow leak ran undetected for weeks. The entire kitchen was saturated along with the finished basement underneath. Over half the house was damaged and many parts had started to grow mold. Extensive water damage restoration services were needed.

Soil-Away worked with the homeowner’s insurance company to execute the flooded house cleanup services promptly. Much of the interior of the house needed to be disassembled and discarded. Kitchen cabinets were ruined. Ceilings, walls and floors needed to be removed. Many of the home’s contents were covered with mold. Once the property was demoed, cleaned and treated the structure was set up for drying. This entire process, including the drying, took one week. Following the flooded house cleanup an industrial hygienist was brought in to perform post-verification testing. Soil-Away’s cleaning passed the test ensuring the mold hazard had been remediated. Rebuild services went underway immediately.

To avoid the need for flooded house cleanup services, there are numerous things people with second homes in the Meredith, NH area can do. Home winterization is an option. This could include draining pipes and shutting down the water supply. Maintaining adequate heat levels is also an option. Many people try to keep their vacant house at a minimum of 55 degrees to help combat issues such as frozen pipes. Another important strategy to avoid water damage is to have the house checked on regularly. Hiring a local management company or recruiting a trusted friend to monitor the property on a consistent basis can make a huge difference.

Water damage cannot always be avoided. New Hampshire winters are tough and pose a lot of threats to properties. The frozen pipe situation with our client in Meredith was an unfortunate example of this. The tough part of the situation was that the water ran for such an extended period of time. The extent of the damage could have been minimized if the house was inspected regularly. We always urge our clients with second homes in the Lakes Region to take extra precautions to protect them during the off season.

If you or someone you know in the Meredith, NH area needs emergency flooded house cleanup services, please have them contact us immediately. Soil-Away has a branch location in Bristol, NH to quickly service the Lakes Region. In addition to water damage cleanup, Soil-Away also offers fire/soot restoration and mold remediation services.